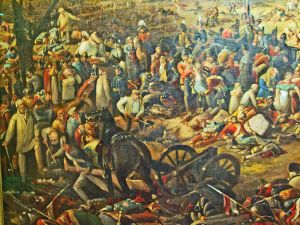 "The morning after the battle of Waterloo", by John Heaviside Clarke, 1816. Image care of Wikimedia Commons.

For the final One Shot Wednesday at One Stop Poetry, and the grand opening of the dVerse Poets Pub, I would like to bring back a classic – the poem with which I introduced myself at the first One Shot Wednesday, in July last year, when One Stop was still just a glitter and a gleam in the eyes of a few good poets.

It is dark, and due to its age not the style of mine to which you may have become accustomed, but I hope you enjoy it all the same – and if you’d like to see the piece with which I more officially gave my ending salute to that wonderful art community, check out last week’s contribution: One Winter Morning.

From wretched slumber do I wake

To a world of endless night—

High above us wraiths now soar,

Men clasp their ears to deafen their roar.

Over hills and shattered streets,

Then all the singers die.

She woke before me,

straining her brush through aurora strands,

smiling at the pale gown

reflected in the blue-green mirror.

in the throb of rehydrated crystal needles.

The vapors of her perfume are scentless,

senselessly caressing the rivers of her eyes

from east to west; an oriental song.

But the lantern burns—

by night she is radiantly departed:

she lays her head in my lap

and the mascara runs in shadows down my leg.

*Out of season by the title, I know, but I hope you’ve all enjoyed the cool touch of this one all the same…my contribution to what may well be the last, or one of the last One Shot Wednesdays at One Stop Poetry. It has been an honor and a pleasure, everyone. I look forward to visiting you all outside of the linkies though, and to continue basking in your poetry as time rolls on. 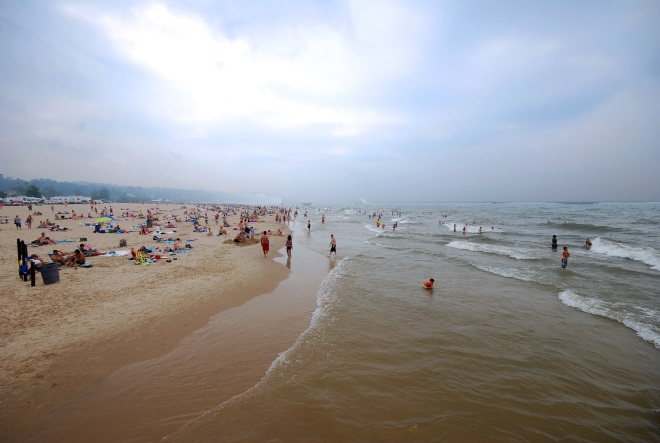 It’s been a while, and a long weekend to boot. In sum: got some sun, traipsed some beaches, wondered and waxed philosophic and photographic somewhere between the trees and the waves, and tasted of the delicious sensation known as BBQ. It was a long weekend, but a good one, and I can honestly say it was the most relaxing I’ve had a good long while, even if I was still running all over the place.

I get the wanderlust, you know?

C’est la vie, though, as they say. To those Americans among my readership, here’s hoping the fourth of July (the USA’s Independence Day, for those of you not up-to-the-know on your history of the land of the stars and stripes) was a delightful blend of summer warmth and rapturous relaxation with those you hold most dear. Plus, if you got to see some of the shiny explosions that were lighting up the country’s night sky, all the more power to you.

What’s the night without a little boom? Whether it’s a spiritual or a physical or even a metaphorical boom, well, that’s really up to your preference. I’m just the humble fellow wishing you a good time, regardless.

But I digress…and supposing you One Stoppers have sifted through my silliness and well-wishes, I’d like to kick off my return and the week with my latest submission to One Stop Poetry’s One Shot Wednesday, a tanka titled: “By the Sea“…

Beneath our hungry shore

between life and grass

* My latest submission for the great gathering of international poets known as One Shot Wednesday. Short but sweet, and more than little cooky to more than a few of you, I’m sure, I give unto you “A Gambol Song”, my latest bit of free verse.

I wanted something suitably nature-oriented for this special One Shot Wednesday – since the party begins on Tuesday, after all, and this Tuesday is the summer solstice, the longest and (hopefully) most beautiful of days. My inspiration seemed cut off by grey clouds this morning, sadly, but with the afternoon there seems to have come a break in the haze of summer, treating my muse to blue skies and colored fields. In that same vein, I tried to step outside my usual, and go for a touch of tanka.

Hope the weather’s treating you all as kindly. May it be a fertile day for creativity!

Across her blossom billows.

And here’s a bit of greenery to put a little summer slant into your day…cheers!

With the milky drink of your lips—

My latest submission for the gathering that is One Shot Wednesday. Returning this week to a style that’s been an old favorite of mine – the cinquain – for the purposes of capturing that summer swell. Lord knows we’ve had the weather for it here.

No dream may suffice

in lieu of waking glances.

such that dreams become vision,

the lie on which heart relies.

* Oh I do so loathe my stomach, at times, for all its troubles.

Forgive this poet’s absence this evening. The above is my submission for One Stop Poetry, and it may not be my best work, but it was produced under a day of food poisoning…which consequently is the same reason you may detect a noticeable disappearing act from me tonight. I’ll likely read as I can, but I’ve been keeping quite to bed today, and given how my stomach’s still acting, I don’t foresee that changing shortly.

when you would walk through moon beams

silver youth, in my mind,

your long-tossed hair that fleeting glimpse

for all sensation’s cheer—

a note to set the pen to dance

What is your name?

Reality, but a longing and a life

no bearing on the yearning—

A thousand ships would sail for you,

in mind, while your eyes turned—

it wasn’t till the flesh took my hand,

cast me out to sea

that all those ships were set to burning.

* My latest contribution to One Shot Poetry Wednesday. This piece was essentially the second part to the post I made yesterday, on muses and their very real, physical departure, in the form of people. Yesterday I gave other people’s thoughts on muses, but today I put forth my own thoughts on the muse’s withdrawal. For those with a physical embodiment to their own creative drive…

you thought that you could break my heart–