If you’ve been following me on Twitter (@aurinth), you probably have heard me rambling on about a new venture of mine, among other things. While I do so love to engage myself in the written word, I also have a passion for photography – you’ve undoubtedly seen bits and pieces of my work scattered here and there about this blog – and that passion has finally (belatedly, some lecture me) into making a website dedicated to that passion.

Galford Photography is a Wix-based site pertaining to all categories of my work. Portfolios including portraiture, nature and landscape, city and architecture, as well as my editorial photography, all make an appearance. Through the site, those interested will also now be able to contact me regarding potential photography work, whether requesting services for some grand new venture, or simply regarding interest in one of the myriad numbers of images already swirling through the galleries.

The real challenge in getting the thing up and running, I would say, was in going back through all my photo archives looking for the right images to showcase. Goodness. Let me tell you – I knew I loved photography, but my own library startled me at just how many images I had lying in wait. Suffice to say, it took me many hours to weed through, and I’ll confess my efforts on commenting for One Shot certainly took a hit for it (don’t hurt me!)…but the end result was a vastly more efficient archiving of my files, and a glittering new website ready and waiting to go. Plus, it kept me out of the 95+ degree June we had going on around us the last few days.

I mean, what was up with that?

But I digress. Now that I can breathe a bit again, I think I’ll be off to actually partake of a little more photography, rather than simply staring at my collected works of it. Certainly enough to stir a bit of the wanderlust in a person, let me tell you.

And of course one last shameless self-promotion for the road: http://www.wix.com/galfordc/galfphotography#! Check it out, let me know what you think – and be sure to let me know if you encounter any issues with the site! 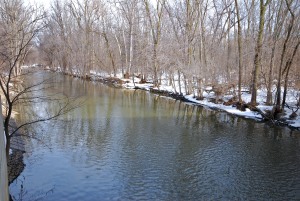 Last week, if you weren’t aware, we here in Michigan experience a little phenomenon we like to call “Fake Spring.” It wouldn’t say it’s commonplace, but it happens often enough that while we are still terribly confused by its appearance, I doubt there’s anyone out there really protesting at this point. 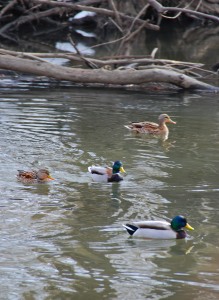 So what is fake spring you might ask? Fake spring is when you have fine, snow-laden winter going on around you, complete with bitter wind chills, hordes of Ugg boots, and North Face jackets, when all of a sudden Michigan decides that all this snow’s gotten a little boring, and all of a sudden the sun break through the clouds, the birds circle and chirp, and all that snow recedes into wet, gloppy pools of thick brown mud.

Suddenly, there is grass again. Bikes make a tremendous resurgence. Coats depart and the crazies (we call them residents) start walking around in short-shorts and flip-flops again. Good times, really.

Of course that strange little bizarro world you’ve entered comes to an end. It ended this Sunday, in fact, when after all that snow had melted, Michigan let loose a maddened giggle, and dumped us with another 7 inches of the white stuff. Yes, it is a strange place I live in. One with a sick sense of humor I might add.

But life goes on, snow or no, and those same crazies in their short-shorts and flip flops return to ice-driving, barreling down the ice-laden stretches without concern to speed or silly little things like…reason, AKA traction. Then, we all cry a little inside.

Hope you’ve enjoyed a few of the pics I took while out and about enjoying that Fake Spring. All are from the Lansing River Trail, a local favorite of mine. These pictures were taken on the first day of Fake Spring, before all the snow had its chance to melt – but as you can see, the river was a lot less icy than it was a couple weeks ago.

Fifty degree weather in the midst of February – to some, apparently, a fact that means “Let’s go kayaking!”

And then, of course, there’s this… 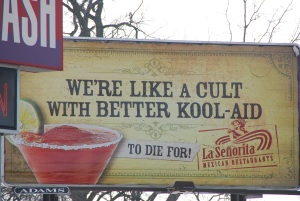 Tasteful advertising at its best!

Shoveled my whole drive at midnight, and it still looked like this in the morning. 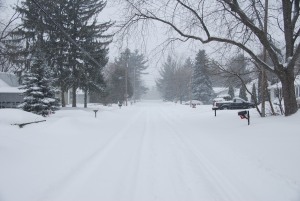 Not a plow in sight.

This is the second part, the conclusion, to what shall henceforth be known as “The Snowpocalypse” Photo Essay for good old Lansing, Michigan.

All of the following are from the morning after the storm. Things were still flaking around then, but nothing more really accumulated.

By this point in the day, snow plows hadn’t yet arrived in the suburbs, though I had shoveled my own property out in the trench-style warfare you find common to Michigan winters (yes, it’s like we’re planning for war against the Yetis. They asked for it).

What kid wouldn't love those hills?

While Lansing and East Lansing’s main streets were plowed… 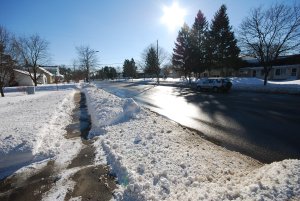 Fane looks on this new Winter wonderland with promise.

…some places in the ‘burbs, like my own, didn’t see snow plows until as late as 9 p.m.

Suffice to say, it made for some interesting travel arrangements for some of those among us sans SUVs. I know my old Taurus never would have made it. Fortunately, it’s long since been dispatched to a better place. 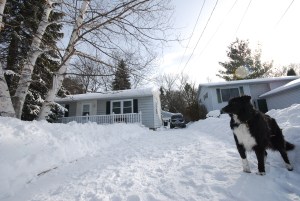 What's that in the distance?

At some point tomorrow I’ll probably try and compile all of these, as well as the photos from the night previous, into a nice and tidy sound slides photo essay presentation for you all, with music and everything.

Now we just have to hope that WordPress decides to play along with my noble intentions. 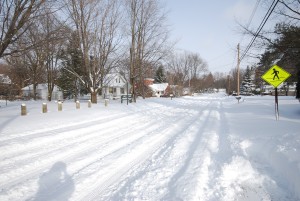 Despite the tracks, a lot of cars struggled through this. 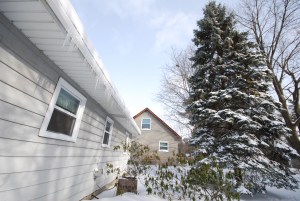 Yeah. I don't think he was going anywhere. 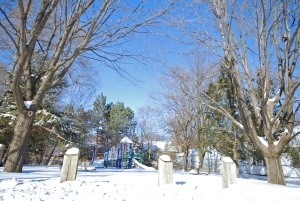 It's a nice little park.

In Lansing, the capitol of Michigan, lies a trail for bikers and hikers alike. The Lansing River Trail is an approximately 13-mile trail through urban and rural stretches alike, lying in the shadows of Lansing’s bustling streets, twisting through masses of deep-rooted forests, rising up in boardwalks or smoothed out in easy footpaths, and all the while trailing the river for which it is named, providing a scenic route for anyone looking for a little exercise. Not as much of that in the Winter, of course, but even in the midst of this most frigid season, it remains a popular destination. It helps, of course, that the trail stretches all the way to East Lansing, and to the MSU campus.

Saturday, I decided to take a walk down the trail in spite of the frosty weather, and investigate the sights I had been denied since the summer, when a long jog was often a morning’s routine. These are a few of the results of my walk. Enjoy. 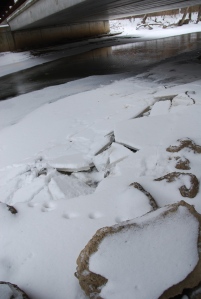 Observe the breaks. Just a few seconds prior, I had been standing there, on what I thought was solid ground. 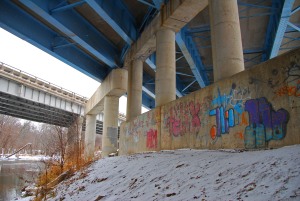 Part of the trail runs under the highway, and where there are bridges, there is graffiti. 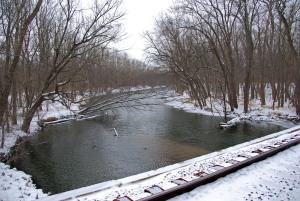 Several sections of railroad also run over the trail, and the river.

One of the numerous boardwalk bridges that are a part of the trail. 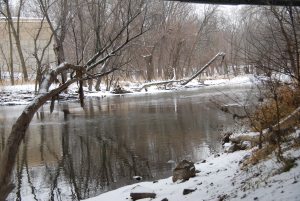 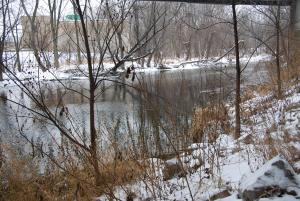 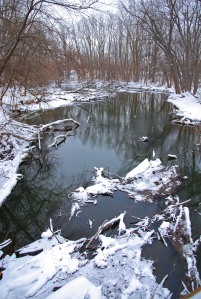 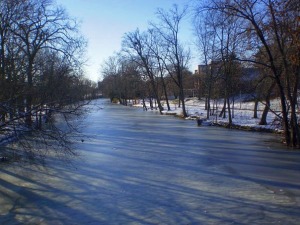 Checklist for a Michigan Winter:

4.       Scarf. Because that floppy little hood you’re wearing is just the wind’s plaything.

5.       Hot Cocoa. For the kid inside. And also that numb sensation you seem to be experiencing.

7.       Salt. Take a step outside after the first winter rain and you’ll understand why. “Boy the ground sure is shiny to—hell!”

8.       A heater. In your home if nowhere else. Don’t got one? Ignore all aforementioned then, cause you’re probably as stiff as Frosty the bloody snow man by now anyway.

9.       Purple fingers. Because hell, even with all the above, you’re still going to get them after any real time outside. It’s a real Michigan color. 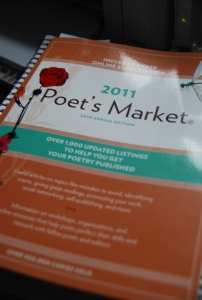 Just came back from a 2 and a half hour jaunt through a frozen Michigan State University and a snowy Lansing River Trail. Cocoa now firmly in hand, I have begun the appropriate after-ritual of sitting in a corner with a space heated on and a sweat shirt pulled snug until the feeling returns to hands and feet. Fingers crossed that it’ll be soon.

We've been spending a lot of time together, these books and I.

Productive day though – a good end to an equally productive week. Poems have been sent to four publishers now, with two more publishers picked out with poetry waiting to be sent to them as soon as they begin receiving again come February. Two more publishers will be getting the e-mails tomorrow, and then, it’s time to move on to short stories. Keep an eye out, you may see some on here soon as well (and yes, I know I’ve said that before. I mean it this time…I’ve got dozens).

The last of my editors just sent in their notes about my novel, so I’m all but ready to go on that as well. One last look through, comparing notes and checking final edits…and then it’s off to another, more intricate publisher hunt, and all the stress that’ll bring. But I look forward to it, anxiously.

As for the job front…well…Michigan is Michigan.

Photos will come tomorrow, along with next week’s quotes of the week (no, I haven’t forgotten. I know you’re all watching and waiting for me to so you can say I told you so).