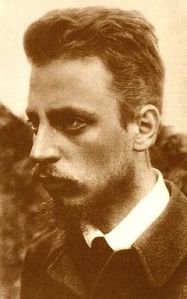 This week, it’s time to celebrate a little poetic brand of Oktoberfest with one of Germany’s most famous poetic sons – Rainer Maria Rilke and his poem: “Archaic Torso of Apollo.” A cerebral piece, built of similes and entrancing image, it is one work that guides you crisply along to an altogether potent ending. It showcases Rilke’s true power and status as one of the foremost poets of the late 19th century, and of the German language in its entirety.

We cannot know his legendary head
with eyes like ripening fruit. And yet his torso
is still suffused with brilliance from inside,
like a lamp, in which his gaze, now turned to low,

gleams in all its power. Otherwise
the curved breast could not dazzle you so, nor could
a smile run through the placid hips and thighs
to that dark center where procreation flared.

Otherwise this stone would seem defaced
beneath the translucent cascade of the shoulders
and would not glisten like a wild beast’s fur:

would not, from all the borders of itself,
burst like a star: for here there is no place
that does not see you. You must change your life.